Petros “The Attorney” was born in the City of Eros. He serves as the Erosian Senate’s Attorney General. 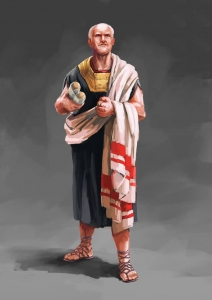 Petros “The Attorney” was born in the year 153. From a young age on, Petros was already an unrelenting person. He only achieved high marks at school and was seen as a great orator by friend and foe.

Petros decided to immerse himself in history, statesmanship, bureaucracy and law. After school, everyone expected a great political career for the great student.

Petros worked as an assistant of the general Attorney in the Senate of Eros from an early age on. He was therefore also present, as a 13-year-old boy, in the Erosian Senate on the day that Graius “The Stupid”, the great-uncle of Graius “The Golden”, was stabbed by the senators of Eros in the event that came to know as the Dispute of the Unpaid. As a young boy, he watched the dying Graius as he watched his coup against the Realm of Eros collapse.

Dispute of the Unpaid

The Dispute of the Unpaid came to know as an event depicting the frictions between the Senate and the Senators on the one hand and the Army and the Generals on the other. The dispute started with a small event in which a transport of pay did not leave in time from the City of Eros to the Westlands to pay the Erosian Western army there.

Years earlier it was decided to centralize the treasury of the entire Realm in the city of Eros. The advantage of this was that the administration and security could now all be done in one place. The disadvantage of this, especially for the more remote areas, was that the pay for soldiers sometimes took longer, sometimes even weeks.

Although there was certainly no mutiny among the soldiers of the western Erosian army yet, Graius and his brother Deudetius decided to seize this opportunity as an excuse for a march to Eros with the Western army. Anxiety in the capital was palpable after the Western army advanced towards the city of Eros and a civil war seemed imminent.

The shrewd senator Efelion finally devised a ruse that would stop the threat of the advancing Western army. To protect the Realm he must stop Graius in his grasp to power. He knew Graius from the past and he knew that Graius was very vain, but certainly also naive, and most important of all; he didn’t like it when others gave him advice.

Instead of a coercive withdrawal message, as the other Erosian senators suggested, Efelion decided to use the situation in his advantage and gave in to Graius’s terms about higher pay for the soldiers and more individual power of the generals to overrule Senate dictates regarding military movements.

But as a sign of respect, he was expected to return the favor. That he would be present at the rectification of the new laws and in doing so abide by the Senate’s rules of conduct, being no weapons allowed in the senate building.

As expected, Graius fell into a trap and was only escorted by an unarmed group of security guards, while his brother Deudetius camped outside the city with the Western army. No sooner had Graius entered the Agorum, the central chamber of the Senate, than the senators stabbed him and his party. Within seconds Graius and his security guards lied on the ground, choking in their own blood, waiting for death to come. It was Petros’ job to drag the corpses out of the Senate building and place them on a large sleigh. To this day Petros sees this as a blot on his outstanding integrity out there as he participated in the massacre of Graius and his guards.

At the same time, a Senate delegation was sent to Graius’s brother Deudetius in his camp outside the city with the message that Graius had been executed for his treason against the Realm. Deudetius was given the choice to march back to Phoclyos while retaining his honor and respect and he would be also given the title Dictator of the Western Erosian Army.

Petros took on the role of general attorney of the senate in the year 197. In this role, he is mainly concerned with the validity of new laws and keeps a close eye on the state of affairs in the Senate. In the Erosian senate there is no ruling party, but all senators are equal and all senators have the opportunity to create new laws and vote for or against them.

He has since also been the driving force behind the concept of legal validity whereby a law is active for at least a year from the moment of voting for the passing of the law, which was previously only a few months.

Petros is a true champion of Erosian democracy and as so stands above the other parties in terms of partisanship. He handles the vote here and ensures that it runs in an orderly manner and ultimately counts the vote as the first voter.

The most contradictory thing about Petros’s candidacy is that, although Petros is a champion of the people’s needs, he has a relatively bad relationship with Kleophanes, the undisputed leader of the People’s Party in the Erosian Senate, while he is a strong supporter of the appointment of a people’s representative in the Erosian Senate.

Petros usually dresses in his toga. You can often find him in the Senate building where he reads new laws and completes them with additions and adjustments. Petros’ office is located in the left colonnade of the Senate building, adjacent to the Agorum, the general chamber of the senate were votes are being passed by the senators and new laws are being created.

You can find Petros “The Attorney” as a 3D printable miniature in our webstore. 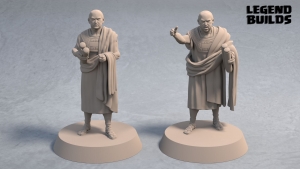 Urd saal is one of the best known pirate brokers of Cyliria.
Tempos “The Bowman”